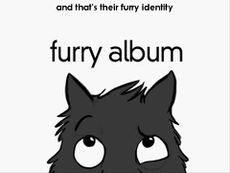 It is a rap song. I hope you like rap songs. I know I do. I will magically count to 4, and the beat shall appear. 1, 2, 3, 4. Are you grooving yet? I hope so! Grooving is what this song's about. Grooving to furry information. Hello!

Furries are diverse - let me say that first. And it's this one fact which confuses the worst. We don't all have costumes or collect stuffed toys, so allow me to separate the signal from the noise.

First off, what's furry? That's an easy thing to tell: It's an animal that happens to be human as well. In technical terms we call it anthropomorphics, But it's easy to explain without all the linguistics; If it walks like a person but meows like a cat, You've got yourself a furry - it's as simple as that!

If it talks like a person and flies like a bird, Then it's still a furry even though it sounds absurd. 'Cause even though birds have feathers and not fur, Mammals are the commonest type of furry in the world So the word comes from them. Even starting with a fly, You'll end up with a furry no matter how hard you try.

So, that's a furry character but what about the rest? A furry is a person to whom furries are an interest. So both the character and the viewer are furry - It'll all make sense soon, so don't worry.

Most furries never meet face to face. We come from everywhere, all over the place. There's furries in the Americas and in the EU. There's furries in Asia and Australasia too. On the Internet we gather from the soil of all nations: All ages and races; both genders; a range of educations. Here we are, all the furries are we, Whether artists or congoers or strictly RP.

Now to help with the furry jargon here's some quick education: RP is roleplaying in a made-up situation; A fursona is a furry you pretend to be, Usually one you make up yourself for other people to see. In furry lingo, one word stands out: And that word is yiff and this is what it's all about. Or maybe I'll shut up and move right along, Because you can't define yiff in a polite sort of song. And that's without touching scritching or spooge, When it comes to furry-speak, there's a veritable deluge. But that's about the quota for the second verse done, So join in the chant and have some fun!

To make a furry's easy - anyone can do it: You take your favourite animal and mix a human through it. You modify the product - is it real or cartoony? Is it two legs or four? Is it straight? Is it loony? Does it have a pair of wings sprouting out of its back? Does it have an extra set of legs that other furs lack? Can it talk or does it speak with psychic communication? Is it you? Is it not? Is it just speculation?

Once you have your fursona all sorted out, You can take a walk and see what we are all about. Some of us have gone and made a costume for effect - But that's a different story - fursuiters on the left and to the right we have the artists, who are numerous in style: Anyway you like it, they can draw it with a smile! But keep in mind that in the mix is every sort of thing And not all of it for children, which can be a bit of a sting.

Experimentation is the order of the day; Imagination keeps our minds at play. Now the next verse is long so I'm going to abort And start the chant early to keep the third one short.

Up to the downside of all this furry fun: Some people don't get it not all, just some. Misinformation and lies are afoot! It's crap up with which I shall not put! Hey MTV! Hey Vanity Fair! Take a bow, Eurotrash and Marie Claire! And a special shout out to - you know what? I don't care. If I bitch about detractors, it's a total waste of air.

I'm only a furry to have fun, say what you like. Anti-furry propaganda can take a long hike! And it's not just that we're all completely squeaky clean, Only sometimes the normal world thinks it has a right to be mean. And normal? Who'd wanna be? It's not for us! You can heckle us all you like from the Boring Bus! And if you need to put a weirdo down to feel bigger, then you're a sad sort of person and you're sicker than Doug Winger.

'Cause it's not a bad thing for the world to know us, But just the kooky stuff is not a fair part to show of us. We don't mind curiosity, 'cause that's what we're about, But any future journalists had better watch out!

One extra single doesn't do a lot of damage; We furries have dealt with quite enough spammage. With all that said, the tide is turning. The wounds are healing and we're quickly learning that:

I'd rather be furry and use my imagination And die a happy death instead of bitter stagnation. I'd rather express than repress and then get depressed And then get stressed about my situation.

Well I've laid it on you birdy style, the good and the bad, The fun and the games and the problems we've had.

So sayonara people, now you know what we're about. This is Kurrel on the microphone, over and out!